SG1 Radio, Stevenage’s very own radio station has recently up sticks and has expanded to larger premises.  They are now based in the old Subway building on the Quadrant and have the luxury of much more space.

This relocation fits in with SG1 Radio’s expansion plans but brought a major headache in the form of a broadcasting problem.

The radio station broadcasts via the internet which is available through an app via a mobile phone, desktop, tablet or smart speaker.  Such a music streaming service needs a low latent, high quality connection to provide their channels worldwide.

This is normally done through high-speed broadband, but the radio station was unable to access this at their new site.  BT has not yet deployed fibre to the cabinet which means it will take a few months to get their superfast broadband up and running.

In the interim, WestEnd Wi-Fi was able to come to the rescue, in the form of hosting SG1 Radio’s streaming service from its own premises; the station can also continue with live-broadcasts from their new studio via Westend WiFi’s pop up internet, as a temporary solution.

“We can provide temporary Wi-Fi services for those in the media, if needed.  BT’s failure to upgrade Stevenage’s town centre to superfast broadband means ongoing problems for Stevenage’s businesses, such as SG1 Radio”.

In the meanwhile, SG1 Radio can now continue their broadcasting uninterrupted as their temporary internet solution means they can carry on hitting the right notes. 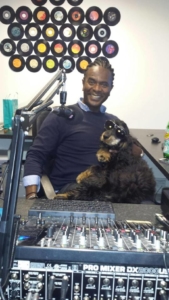